the final menstrual period, determined after 12 months with no vaginal bleeding

CFReSHC CF-SRH Resource Guide by Patients for Providers and Patients

Menopause is the time that signifies the end of a woman’s menstrual cycles. It is marked when a woman has not had a period for 12 consecutive months and no other physiological cause can be identified. It denotes the end of a female’s childbearing years [1].

Menopause in CF is not a well-researched topic, because until recently, very few patients lived long enough to reach menopause. With better treatment options, patients are surviving longer, and more women with CF are entering this life phase. In the average life span, women will spend one-third of their life in menopause. Menopausal physical changes on average last four years to 10 years [2]. Studies promote hormone replacement therapy during this life phase to improve quality of life [2,3]. Therefore, an exploration of menopausal symptoms and treatments warrants exploration as women with CF look to differentiate CF symptoms from peri/postmenopausal physical changes and seek treatment options.

Priority Questions on Menopause for Providers and Patients to ask during a Clinic Visit:

During perimenopause and menopause a variation in hormone levels can produce physiological and psychological changes. Women might experience some or all of the following:

Menopause is considered the day of a woman’s last period, defined after 365 days without menstruation. The time prior is considered perimenopause and the days following are termed post menopausal. During menopause, the sex hormones estrogen, progesterone and testosterone are reduced, which can lead to “atrophy of the vaginal mucosa, causing vaginal dryness, dyspareunia (painful intercourse), itching, vaginal stenosis and urinary incontinence” [3].

The menopause transition (MT) causes a variety of symptoms, such as lethargy, hot flashes, vaginal discharge, insomnia, osteoporosis, insulin resistance, and an increased risk of developing chronic conditions, such as diabetes and cardiovascular disease [4]. Anna Cyganek et. al (2018) find that 70-80% of women experience hot flashes, which range from mild to severe enough to negatively impact quality of life [5]. Citing Tsang’s work, the Cystic Fibrosis Foundation’s Adult Guide to CF reports that women with CF experience menopause an average of 2–3 years earlier than the general population. Tsang has noted the most significant reported perimenopausal changes for women with CF were sleep disturbance and depression [6].

For its part, menopause research in the general population suggests that having a history of depression makes it more likely a woman will experience a depressive episode as she approaches menopause. Bromberger and Epperson (2018) recommend treating women for depressive symptoms experienced during this transitional phase and indicate that the risk of depression declines 2-4 years after the final menstrual period [7].

Implications of Menopause for Women with CF

A large, longitudinal study by Triebner examining the relationship between lung function and menopause across several European populations shows both FVC and FEV1 decline in women transitioning to menopause and for post-menopausal women, over and above declines expected with age. Further, the decline is more pronounced for FVC, suggesting that the link is related to airway restriction rather than obstruction. Real et al concur, and remark that lower lung function and increased respiratory symptoms are particularly found amongst “lean women” (BMI < 23) [8]. Several mechanisms may explain this link, including systemic inflammation, osteoporosis (which can reduce the ability to expand the thoracic cage) and insulin resistance [8]. This observed decline likely has ramifications for women with CF as well. 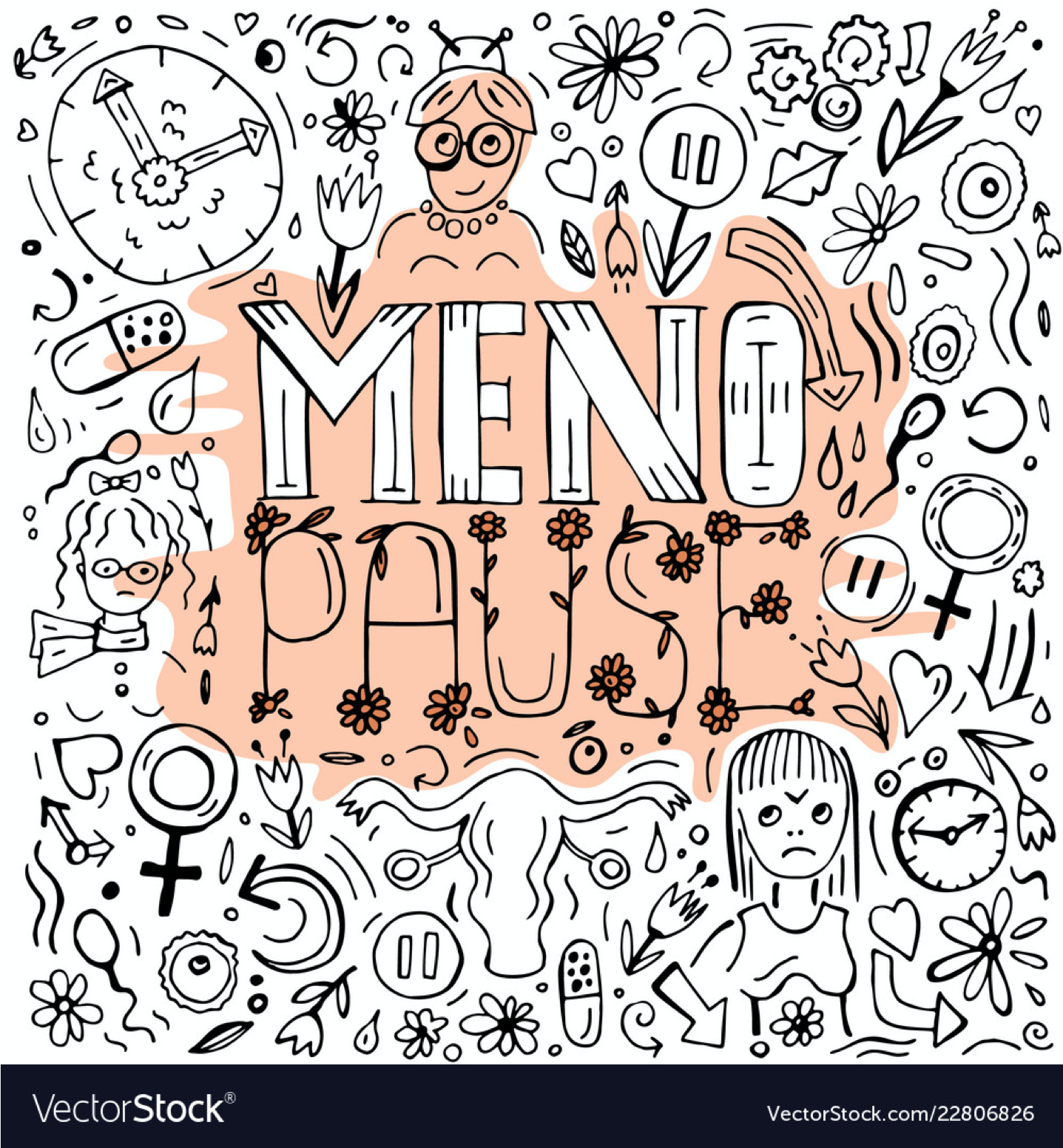 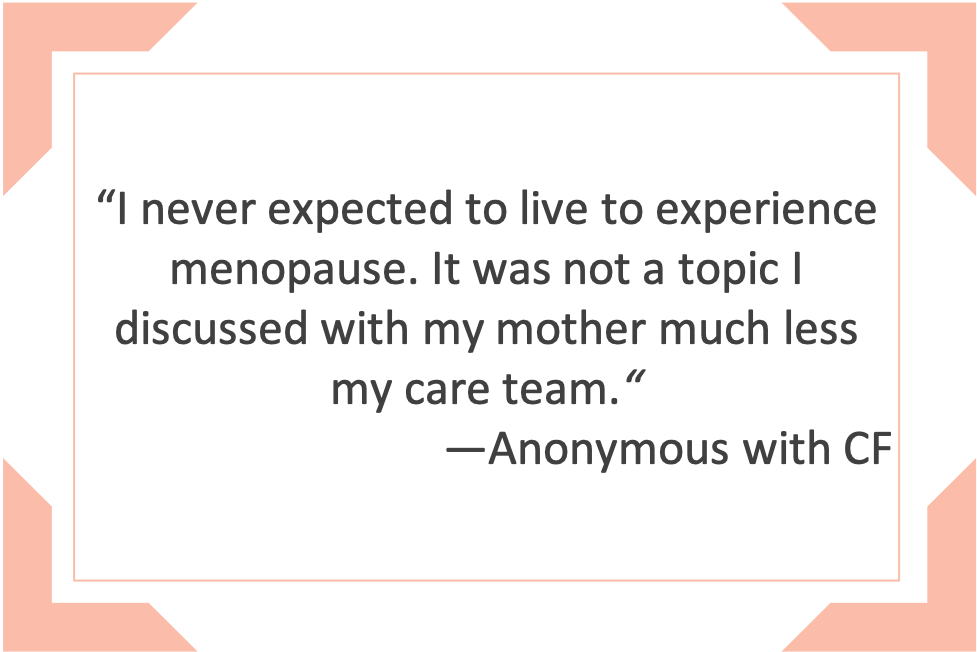 Bone health, which is already an important factor in CF care, is of particular concern during the menopausal transition. Women experience a change in bone strength which can lead to osteoporosis and future fractures.9 Rapid bone loss occurs in the three years leading up to menopause and continues for three years after due to changes in sex steroid hormones [9].

Post-transplant patients on immunosuppressive drugs might see more accelerated bone density loss. Additionally, women who have undergone a transplant might experience premature menopause. These women, seem to do well with hormonal therapy during menopause, but close monitoring is recommended [5].

HRT, also called hormone therapy or post-menopause hormone therapy, can help with night sweats, mood swings, hot flashes and reduced libido associated with menopause [2]. Options include estrogen-only therapy or estrogen–progestogen therapy (EPT) and patients should be well informed to weigh the benefits and potential risks [10]. HRT can be administered orally or topically with an intravaginal cream or patch. One concern about HRT is its effect on the liver. Some CF and transplant medications can be taxing on the liver and oral estrogen used to treat hot flashes also have a pronounced effect on the liver. Estrogen topical preparations avoid “the first-pass effect” of being primarily metabolized through the liver”[5].

Recent observational study has shown that there is an increased risk of breast cancer (or pre-invasive ductal carcinoma in situ) for women using combined HRT after >5 years of treatment. This risk increases with prolonged treatment…(and)… there was no increased risk of breast cancer seen for users of oestrogen-only therapy” [11,12]. Results from the Women’s Health Initiative (WHI) studies, which assessed the risks and benefits of HRT in postmenopausal (non-CF) women, indicate that [13,14]:

It is important to note that risks for the aforementioned diagnoses reduced when women stopped HRT [17]. 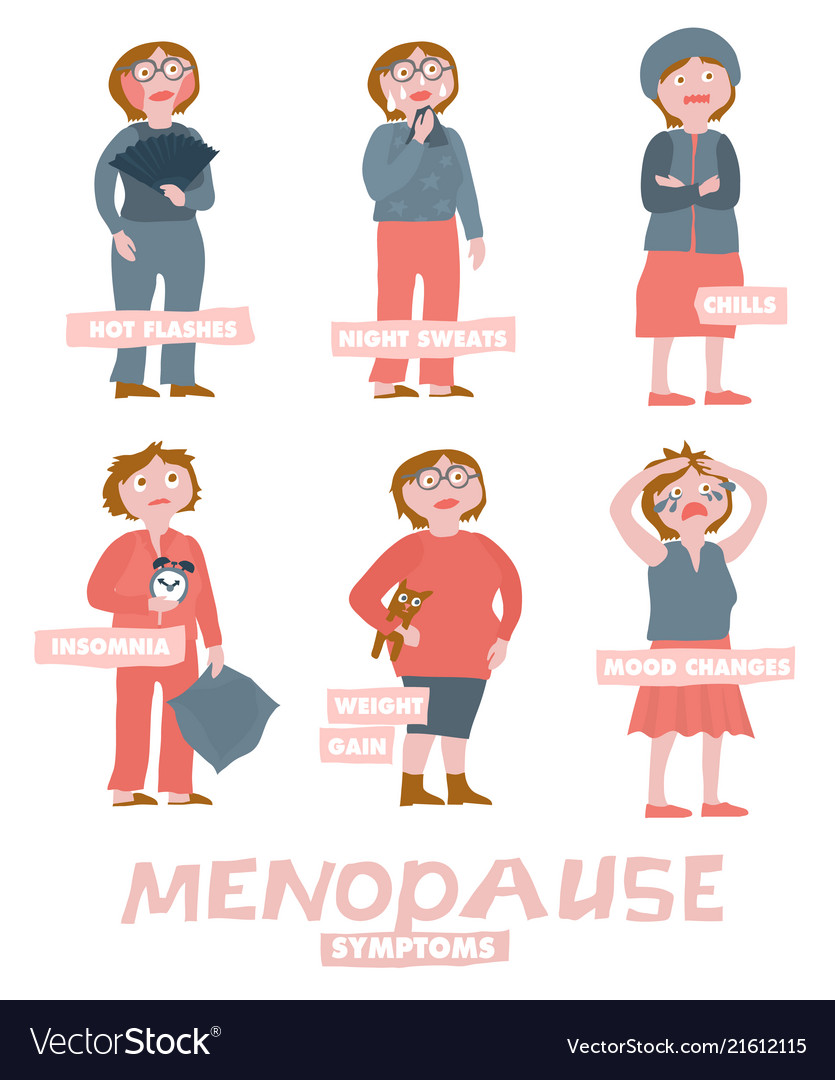 While there are treatment options for MT, there is no cure except time.

Are there Benefits to Menopause?

While there can be late life pregnancies in the perimenopause phase, some women experience a sexual resurgence and appreciate the freedom from menstrual cycles and contraceptives in menopause [19]. Support from other women and the ability to share stories can help women bond and deal with the changes they experience [18]. The National Women’s Health Information Center finds that society’s and women’s ideas about menopause might become more nuanced if more women were vocal about their menopause experience [18]. 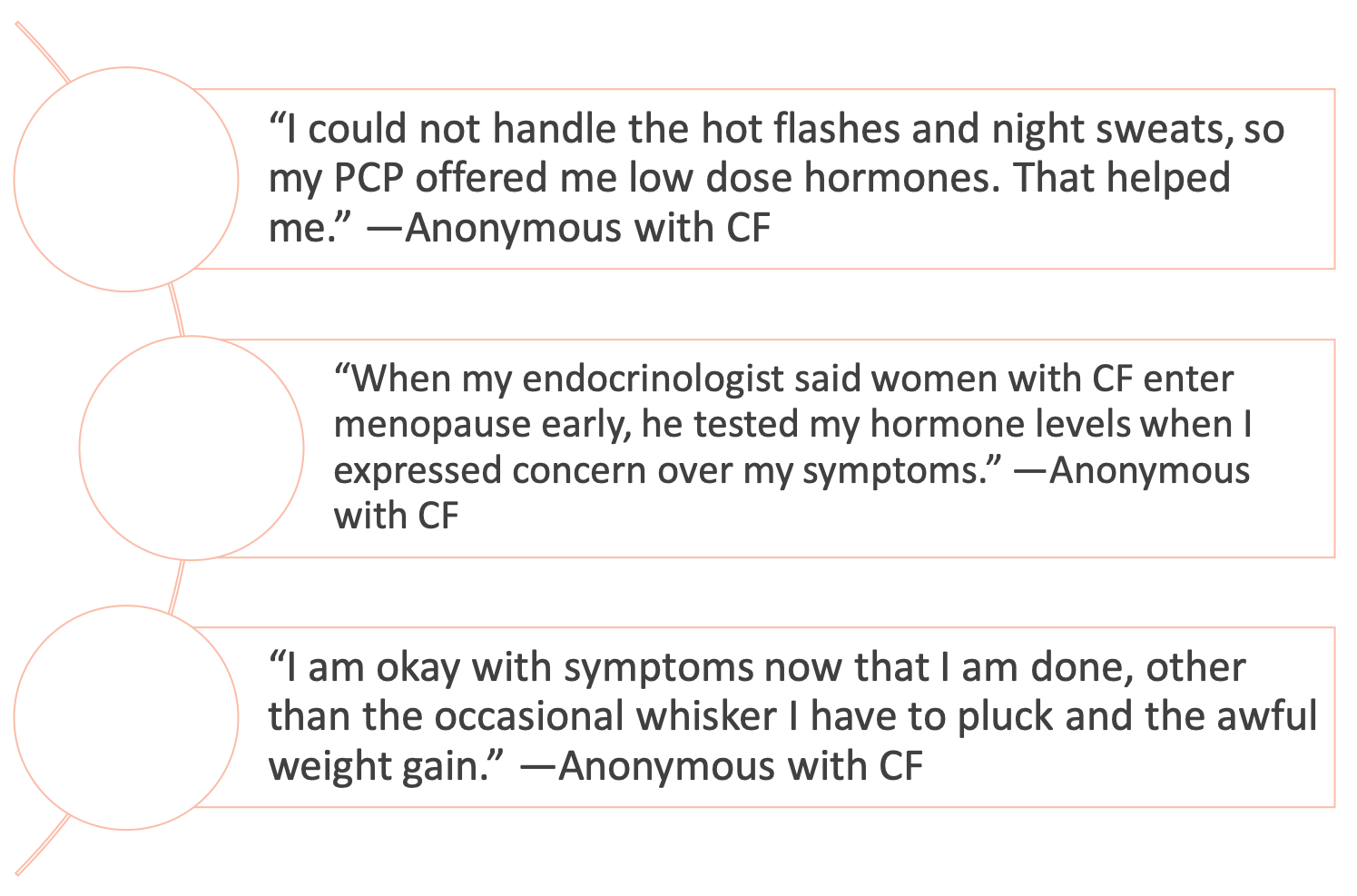 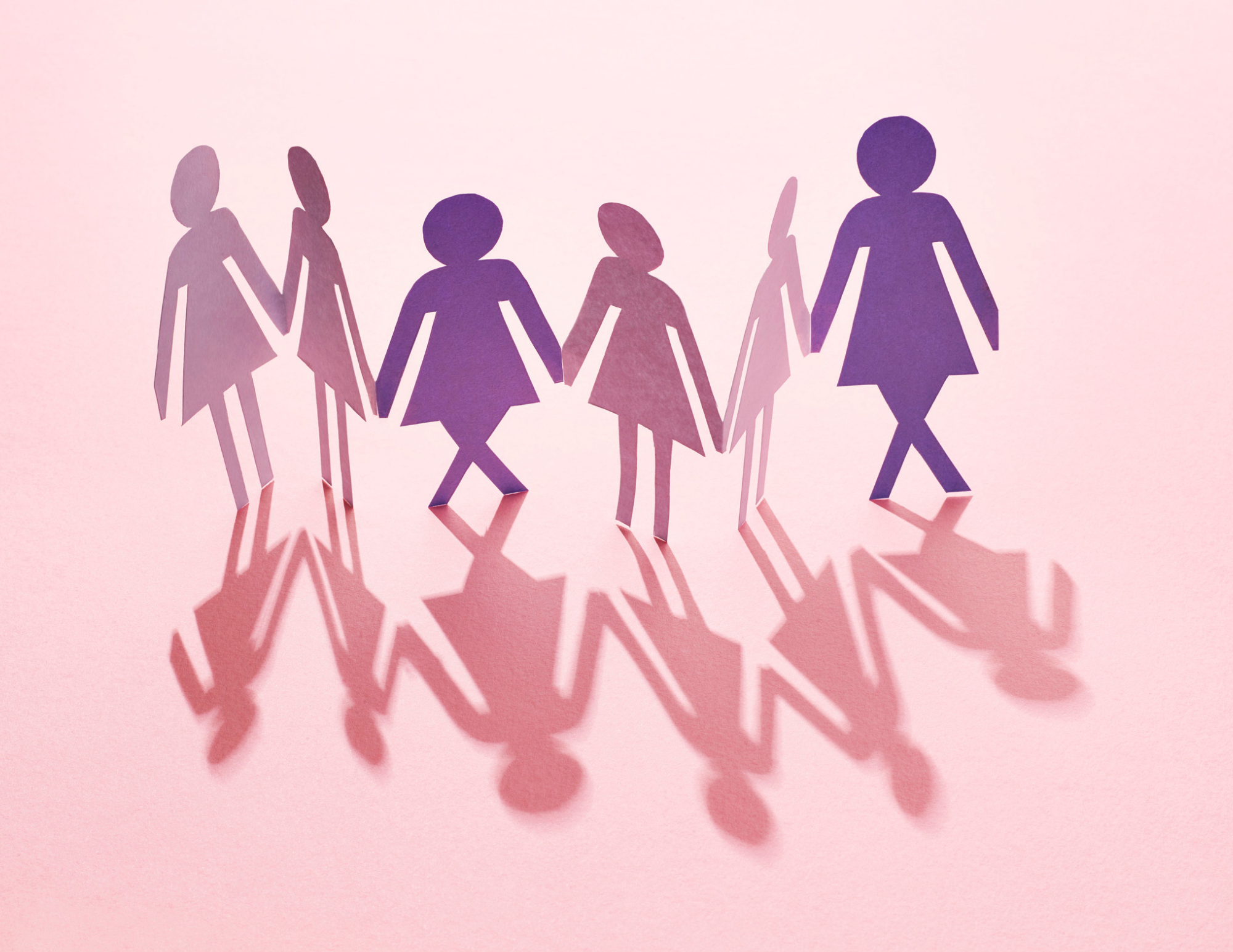 Want a free printable PDF download of this section for your use in clinic? Just give us your name and email address below to get your download link. This will not add you to our email list.